While the team has returned safely to Connecticut, I think some of us have left a little piece of our heart in Sicily! The Breath of Heaven meetings in Sicily were a great success. The final three days of the conference were filled with encouraging messages and personal testimonies to help build up the church in Sicily. There were prophetic words about the influence the Sicilian church will have throughout the Mediterranean region and how each believer can affect the world around him. Other teachings focused on the miraculous healing power of the LORD, the importance of being still with Him, how to build an altar of praise—starting within individual families, the significance of receiving the Holy Spirit—the “Ruach” or Breath of God, and the ability to trust in and partner with the LORD as He fulfills our dreams. On the final evening, Pastor Wes shared a powerful message from Ezekiel 37 about how the Breath of God needs a body to reside in—the Body of Christ. There was a positive response and we shared in a significant and symbolic time of prayer over Pam and Lella as representatives of the unity of what God is doing and will continue to do in and through His body.

Throughout the conference members of the Wellspring team prayed in the prayer room during the various daily and evening sessions. We were all so encouraged by the connections we found that existed between what the LORD was doing in the prayer room and, often at the same time, in the sessions. We had repeated stories of words being imparted in the prayer room that were being shared in the speakers’ messages, either simultaneously or within a few hours of someone’s prayer time. We felt that there was a literal flow of what God was showing us in the prayer room that moved on out to impact the daily meetings; His breath was moving like the wind throughout the conference. We were also encouraged by the number of people who attended the conference. Many churches were represented as the Italian people came together in unity to be part of what God is birthing in and for Sicily and the region. We were greatly blessed by the warmth and kindness of the Italian people. Santo told us that many Italians could not understand why we had to leave, saying,”This is their home now!”

On our final day we had a smaller gathering of prayer and worship with the team. During this powerful time we dedicated the prayer room that is the center of the Calvo’s vision for a 24/7 House of Prayer. We returned home expectant that God will both continue and increase what He has started.

Cyndy Bezz, for the Sicily Team 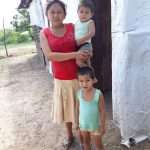