A Christmas Note from Pastor Rick: The Spoils of Christmas

I was talking with Rusty Jacobs the other Sunday before church and he shared with me a story that I think is worth repeating. It had to do with a blogger whom he follows who had gotten some flak from some fellow Christians about something he had written about celebrating Christmas.

It seems that some of his followers felt the need to inform him that much of what we think of as a traditional Christmas celebration find their roots in pagan traditions. It is true that Christmas trees, wreaths, yuletide, even the dating of Christmas near the winter solstice can be traced to pagan festivals and observances. All of this is true. Druids and other European pagan groups worshipped trees. Ancient Romans decorated their doors with wreaths made from evergreen branches during their midwinter festival of Saturnalia. Yuletide has been connected to a celebration of the “Wild Hunt” and the pagan god, Odin. These are just the obvious pagan connections with our celebrations of Christmas; I am sure there are more. And, of course, we have seen in our modern culture the secularization of genuine Christian traditions associated with Jesus’ birth. Like gift-giving gone wild in our secular materialistic culture.

I love what the blogger replied to his Christian critics, who took him to task for not discerning the pagan roots of many of the trappings of our Christmas celebrations. He quoted an old (not Christian) proverb: “To the victor go the spoils.”

The point is profound. The baby Jesus grew up to become our crucified and risen Lord. His life became the light of men (to quote the Apostle John). And as his light spread to the darkness of pagan Europe, he won the hearts and minds of a continent. His light overtook both people and their culture. He won! So the trees that were once worshipped became pointers to his birth—and to the tree of his saving death. And a mid-winter festival associated with ancient gods and superstitions has now become a great occasion of celebrating the birth of the Christ child. He won—he captured the hearts of men and women and so now he infuses our culture in ways that only victors are able to do.

So, Merry Christmas! Enjoy the beauty of the decorated tree! Celebrate the Light who has come into the world! Give gifts in honor of the One who is the greatest gift ever given! Enjoy family and friends and feasting! Worship the infant Jesus who came to be our Savior! Have fun and experience joy in His Name! 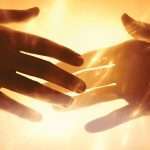